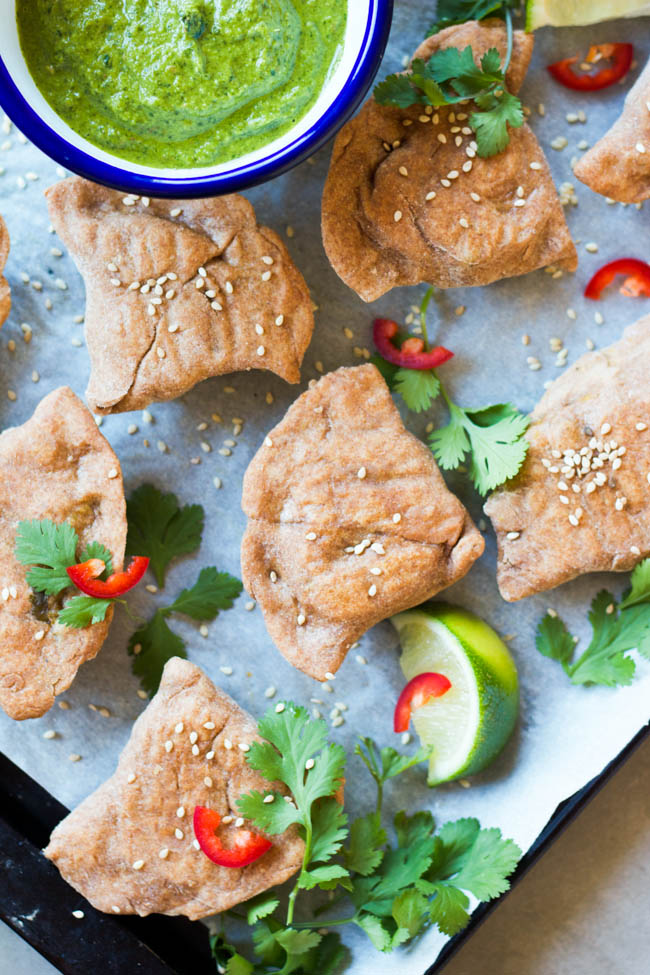 Sometimes you mess around with a recipe and it just doesn't work. No matter how hard you try, you just can make a super healthy and tasty gluten-free vegan fat-free croissant (well, maybe you can, but I can't). Maybe it looks good, and it might taste....well okay, but much like those times you accidentally buy 'baked' potato chips instead of the fried ones, it just doesn't satisfy you in the way you want it to. And you know what, sometimes junk food is better off being junky. But then the other 99% of the time, unhealthy food is made a hundred times more amazing by making it healthier (hello banana ice cream!!!). And this is just the case here.
While samosas are typically deep fried, often meat filled, and usually made with refined white flour, these little ones are vegan, oven baked, and made using whole spelt. Filled with sweet potato, warming spices like cumin, and fresh cilantro, they are substantial enough to be a light dinner for four, or a hearty lunch for two. I like to serve these along side the sweet Mango Chutney and zippy Cilantro Chutney, both of which help bring a bit of tropical spin to these chilly spring days. To turn this into a compete dinner, try serving along side or as an appetizer to my Go To Ginger Dahl.
If you need your samsosa to be gluten free, try using the filling in rice wraps like this 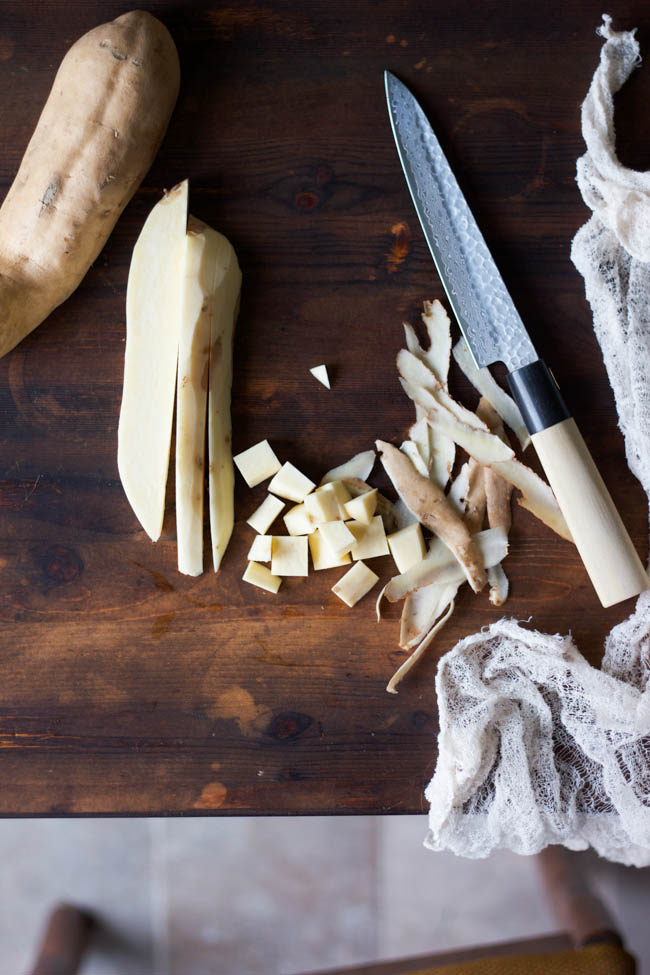 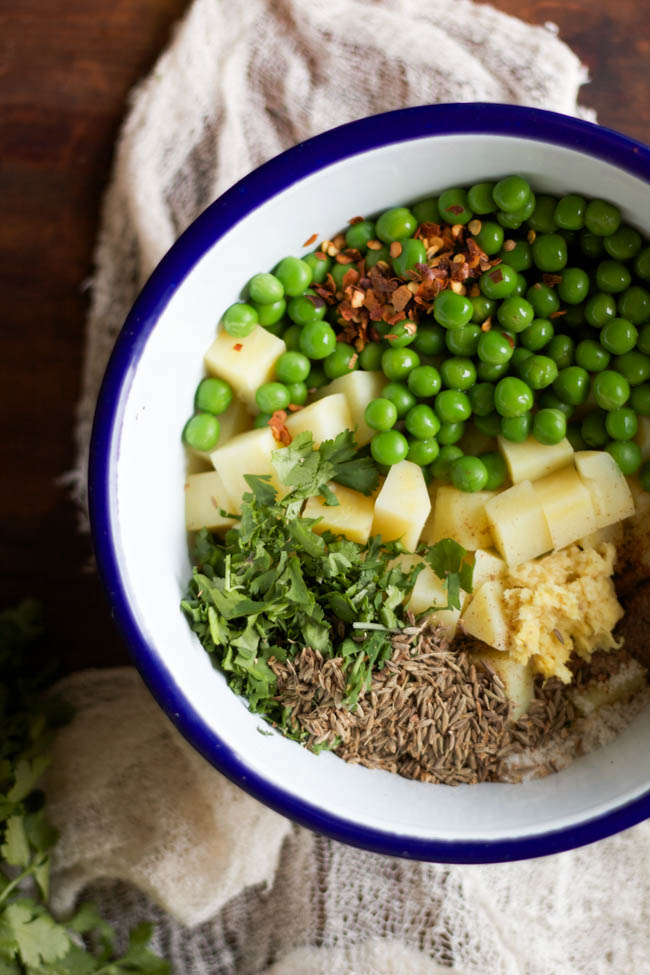 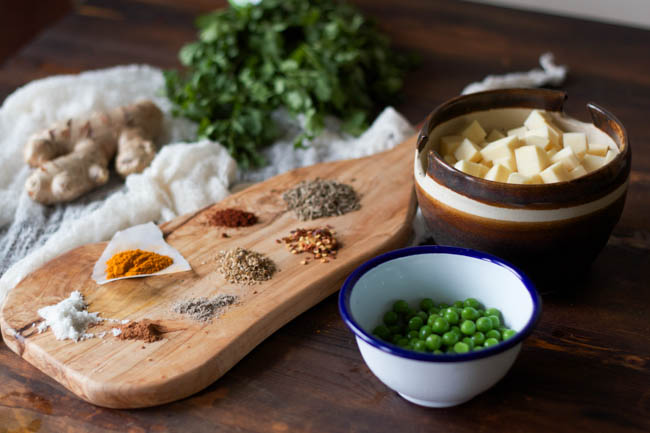 2. In a mixing bowl combine the green peas, cilantro, fresh ginger, chili, cayenne, turmeric, cardamon and salt. Gently toast the cumin and coriander in a dry frying pan until fragrant, and gently crush with a mortar and pestle. Add these to the mix as well.
3. Finally add the sweet potato and stir to combine. With the back of a fork, gently crush about half of the sweet potato cubes, making a nice and chunky mix.

¾ Cup Yogurt (if using a thicker vegan yogurt, try reducing the amount by a couple of Tbsp. and add a couple Tbsp. Almond Milk to thin it out)
1 ½ Cups Spelt Flour
A Pinch Sea Salt
More Flour for Rolling
A little Avocado Oil or Coconut Oil for Brushing
A Tbsp. Sesame Seeds for Sprinkling
Procedure:
1. Combine the salt and flour in a bowl. Add the yogurt and stir until combined. Place the mixture on a work surface and knead as you would bread, adding flour as needed. How much more flour you add will depend on the yogurt as well as the grain.
2. Divide the dough in half, then each half into approximately four (so you have eight balls total).
3. With a little flour, roll each ball into a circle the size of a saucer (about 15 cm or 6 inch). Bring the left edge of the semi-circle over to the right cut edge (see pictures below). Press the seams together to make a little cone. Fill the cone with about 1 ½ tablespoon of filling, making sure to leave enough dough at the top to seal together. Press the top edges together to seal completely. If you have trouble at anytime sealing your dough's edges, dip your finger tip in water and gently moisten one of the seams.
4. Place samosas seam-side down on a parchment lined tray. Lightly brush or dab a little oil to the tops of the samosas and sprinkle with sesame seeds. Bake in a pre-heated 218 C (425 F) oven for 13-15 minutes, or until the begin to turn golden on the bottom.
5. Reduce the oven temperature to 180 C (350 F) and flip the samosas. Continue to bake for another 10 minutes. Serve with chutneys. 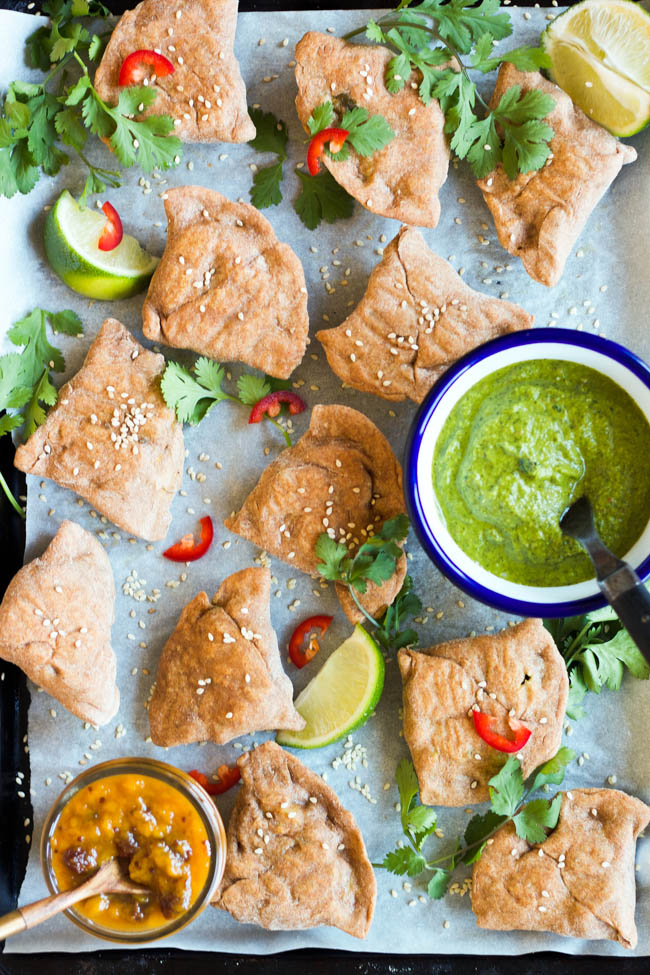 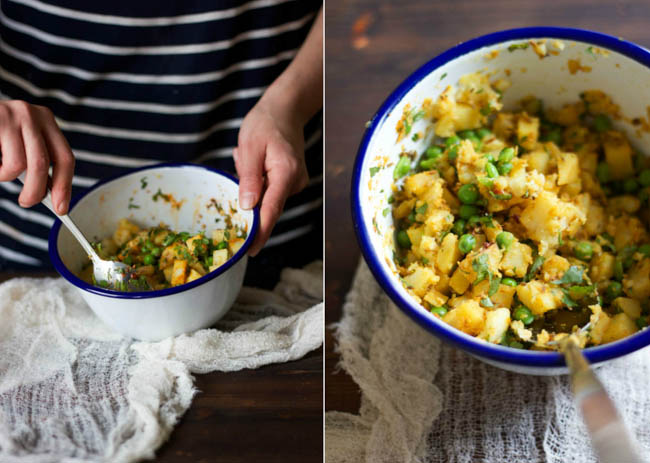 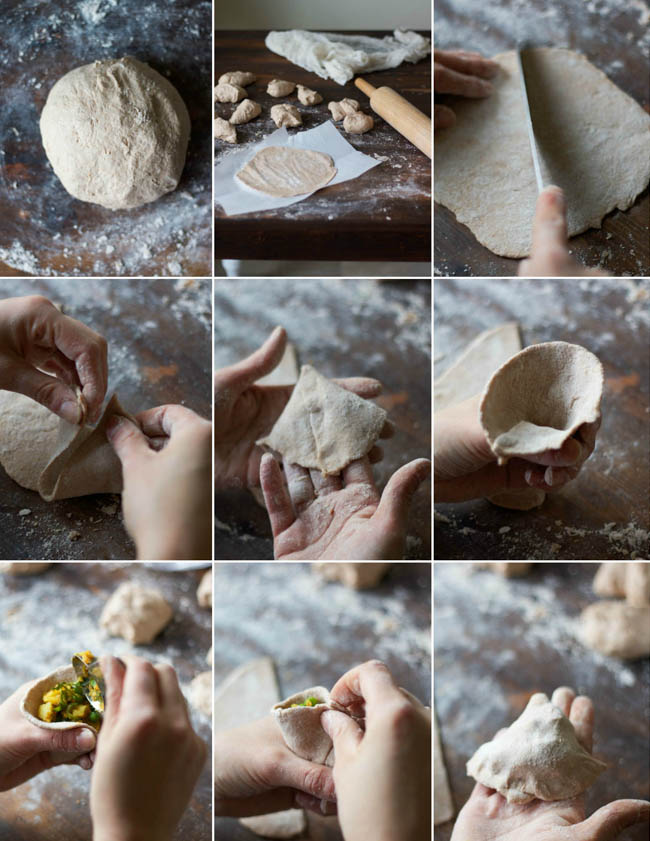 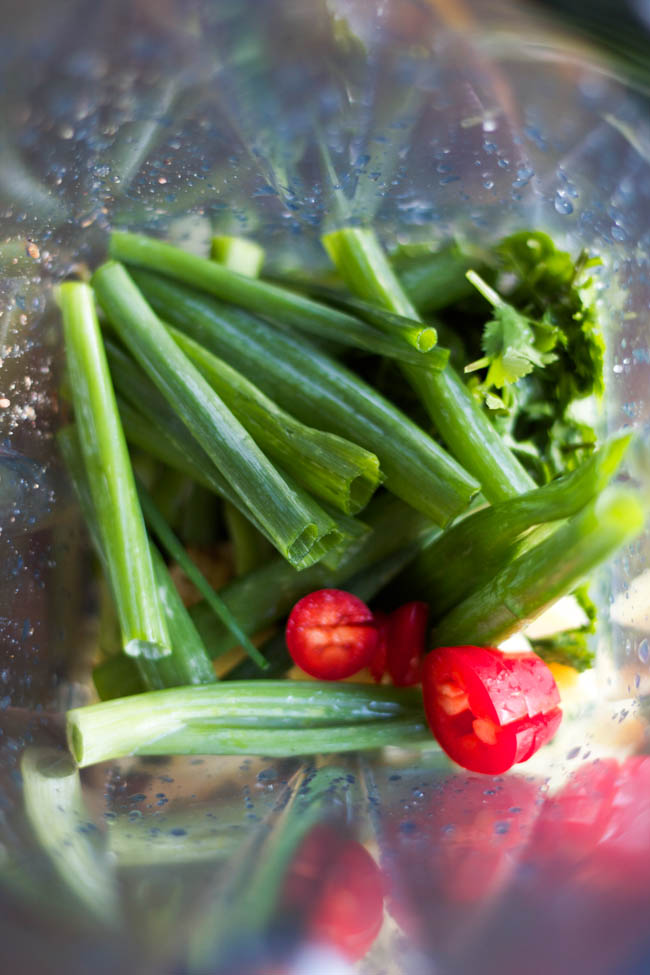 2. Remove the lid and gently mash the softened mango. Add the mustard seeds, raisins, cinnamon, chilli, honey, salt, and all but 1 tablespoon of the apple cider vinegar. Simmer with the lid off for about 20 minutes, stirring regularly.
3. Once the mixture has thickened up a but add the remaining tbsp. vinegar and let cook for just a few more seconds before removing from the heat. Let cool before serving. 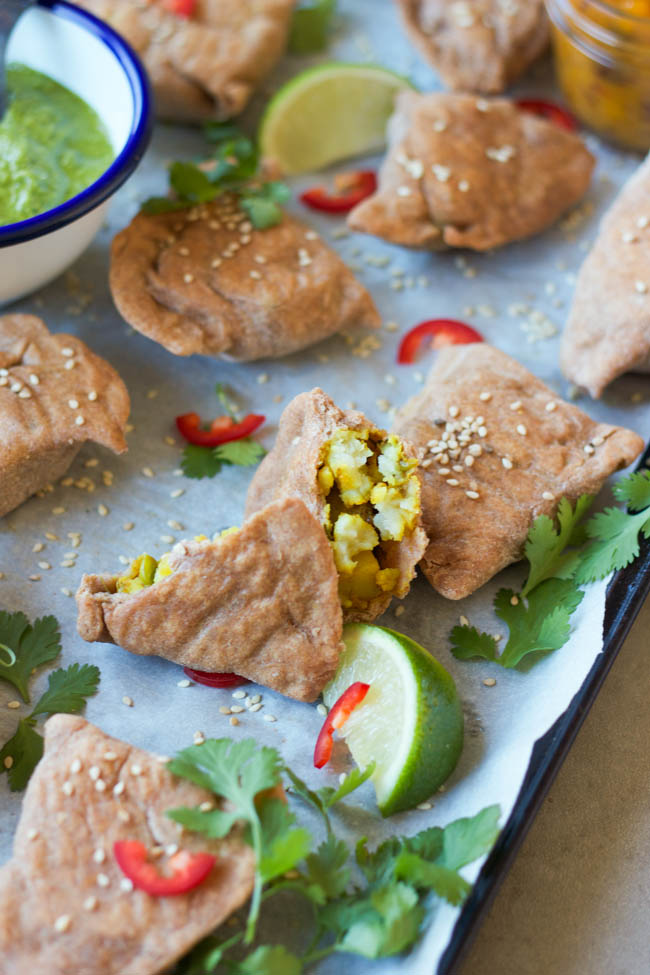