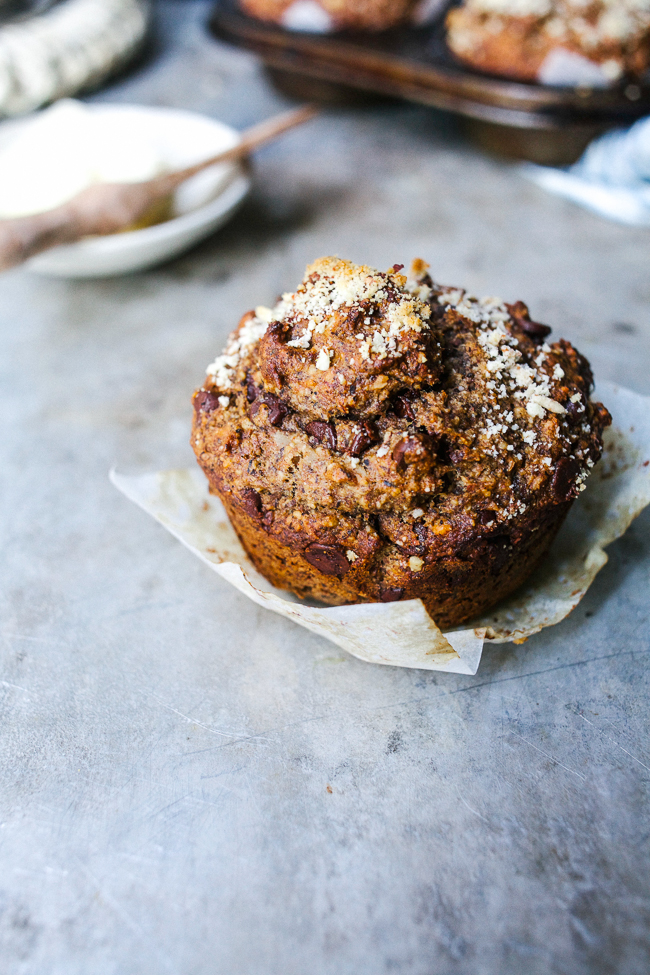 Let's talk about my new love, these banana buckwheat muffins! The farther away I've travelled from the west coast, the worse and worse the muffins begin to taste. And this has consistently really bummed me out. There, I said it. Phewf, that was oddly releasing. I always think optimistically about new cities and coffee shops, I've even been known to google search 'best muffins in so and so town', but these tactics are never to any avail. I'll walk in, press my little face to the glass, taking one look in the case of fluffy white cakes, and shutter away in disappointment.

I clearly remember the one time this summer in New York, when I was unorganized and therefore found myself out of the house and famished. I headed into a coffee shop before work and saw a blueberry muffin which appeared really promising. At mt internship I eagerly dug into the top (like the true Elaine I am), only to discover the weird taste of artificial cake and the icky feeling of pasty white flour and sensation of greasy fingertips. A sudden wave of disappointment hit me, and I'm pretty sure the rest of it laid untouched all day.

I don't know why, but the hippy-dippy lifestyle of the Pacific coast offerers the prime conditions for nourishing and fulfilling muffins that are second to none. Unlike said oversized, gummy-centred, mini cakes often found in cafes and bakeries most other places, west coast muffins are heartier, less sweet, and often full of wholegrain goodness. And that's just the way I like them! While I know that 'hockey puck' bran muffins aren't for everyone, there is certainly something to be said for having a breakfast/ tea time snack that doesn't leave you feeling empty, or worse yet, just gross, after eating.

These banana buckwheat muffins are the perfect happy medium. By replacing the white flour with wholegrain, adding fibre with fruit, and reducing oils and sugars, I've come to a happy medium where west coast hippie muffins and east coast cakes can mingle and become one. Tossing in some dark chocolate chips helps to bring these buckwheat banana muffins from the realm of "healthy hippy" to that of cakey indulgence without sacrificing flavour, texture, or healthfulness. Aaaaand just putting this out there, my guy who is very particular to what he calls tasty, called these yummy more than once (we actually made three batches they were so good)! 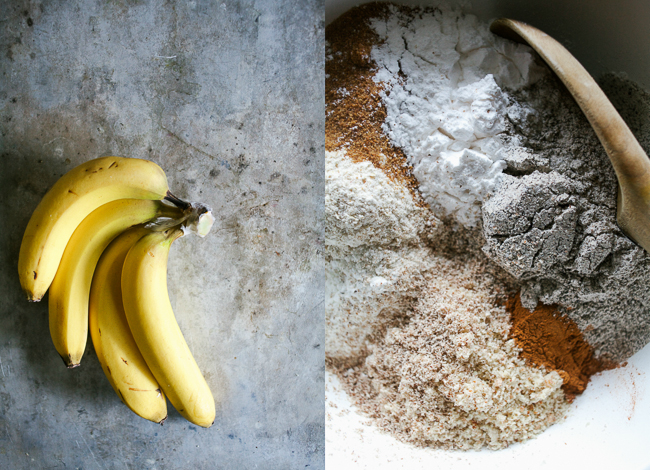 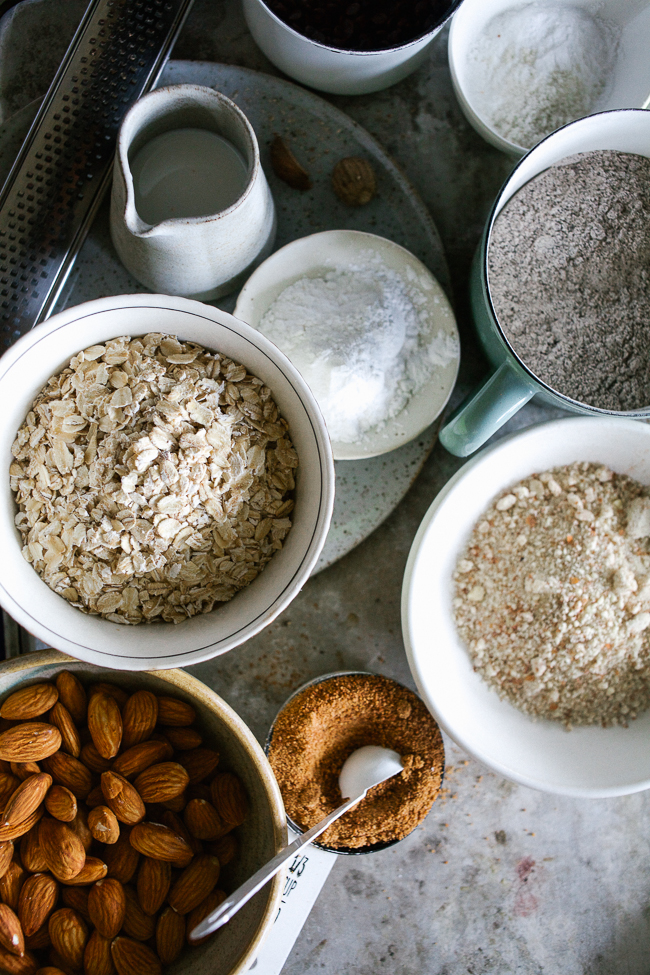 Need your muffins to be nut-free?—try grinding sunflower seeds instead of the almonds

Looking for gluten free?—make sure you use certified gluten-free oats 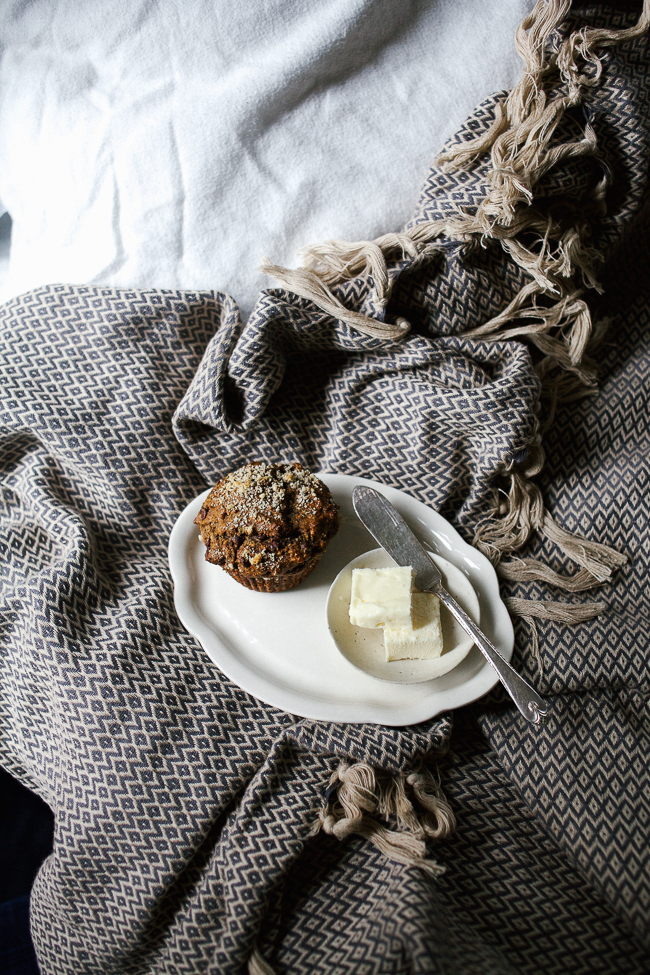 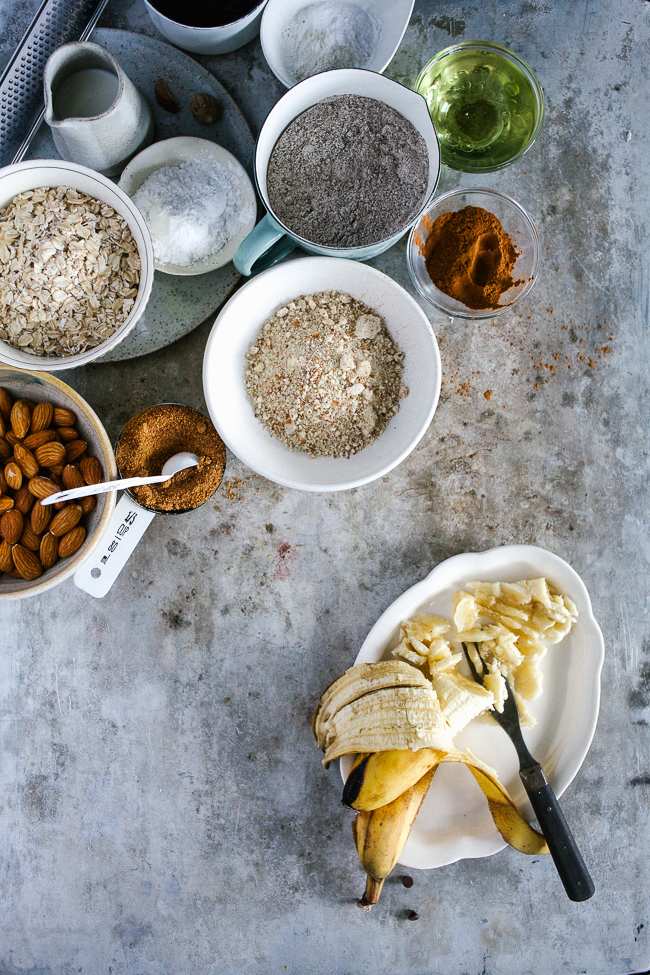 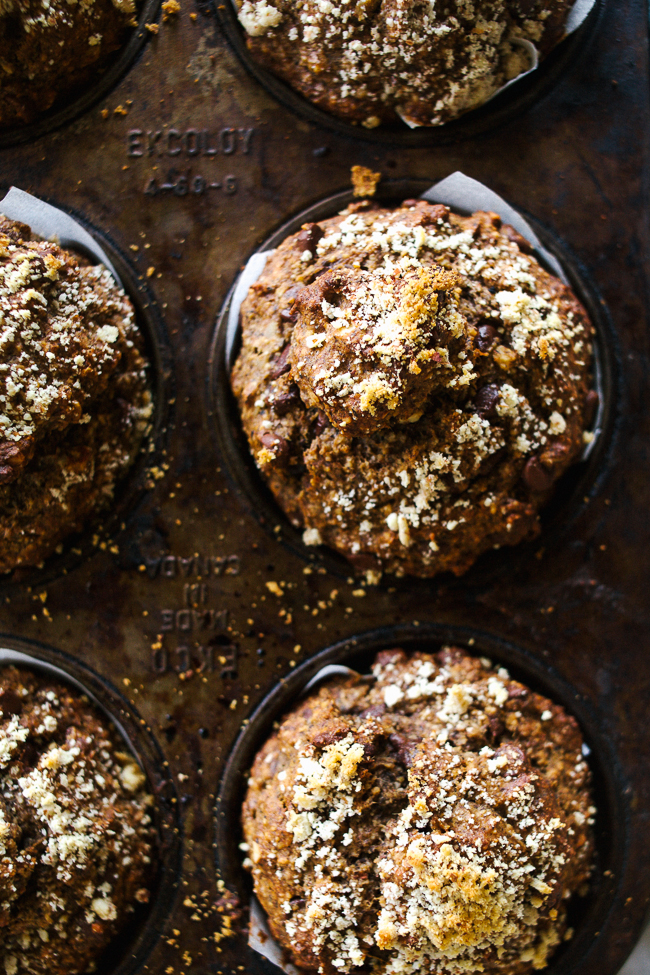 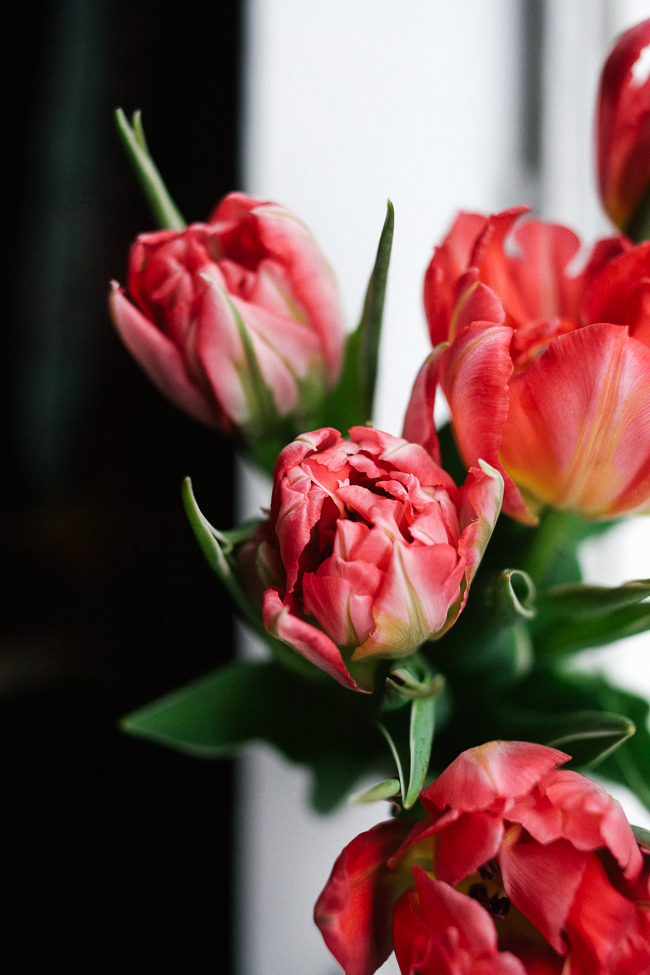 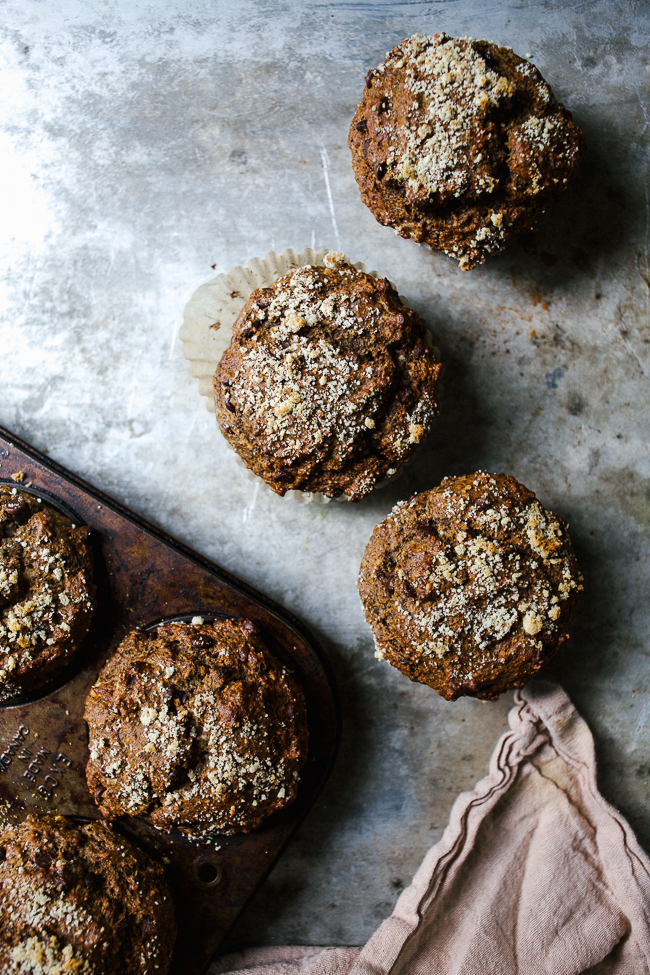 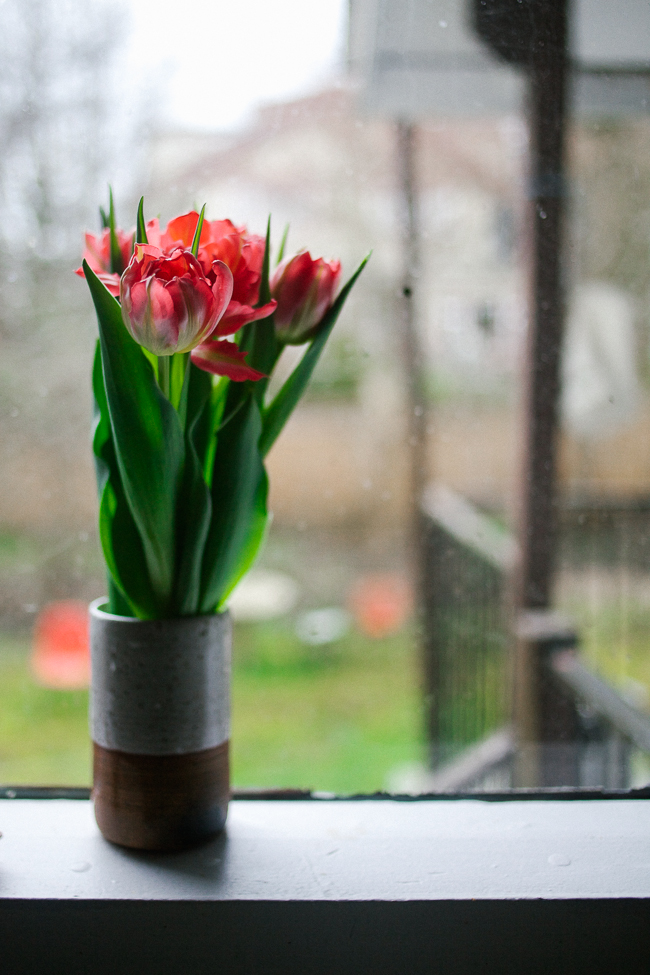 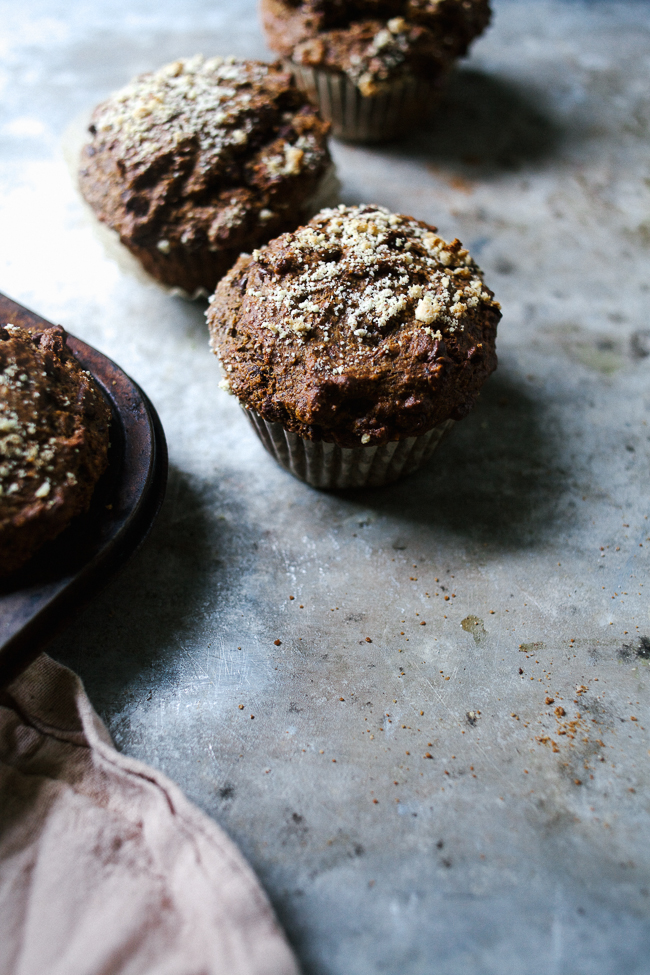