Whenever I head to the supermarket, I stroll up and down just about every aisle (every aisle but the laundry soap one, as the overbearing smell makes me feel a little queasy). I love spying on the new products, the seasonal kitch, and the packaged processed foods. I like to imagine a life where I am the type of person who buys the frozen lasagne, or the individual pudding cups. Maybe the type of person whose shopping cart contains not much more produce beyond peeled baby carrots. My longing doesn't stem from a desire to live like them, nor do I condemn them for how they eat. My obsession is purely based on interest, and this long-held yearning I have to see just how other people live.

Growing up we didn't eat much packaged food, beyond what my grandmothers would sneak us. I vividly remember elementary school, where I'd secretly take out my nut butter and jam sandwich on homemade brown bread while my classmates devoured their wagon wheels, and fruit by the foots, and gushers (which still remain a mystery to me). I longed to be one of those kids. I longed to have a juice box instead of a reusable Tupperware glass. I longed to have plastic forks instead of metal 'cutlery', paper napkins instead of homemade cloths ones, a My Little Pony lunch box instead of the Ninja Turtles one I so forcefully picked out. Lunchables, Dunkaroos, you name it! I just wanted to be what I thought was 'normal'.

It's funny how over time, one's desire to 'fit in' wanes. As we grow, we realize how the world isn't always so different from who we are, nor does it look that different from where we came from. We are able to find souls who, like us, were forced as children to wear rainbow patterned woven hats from Guatemala (and we subsequently marry said persons...). Or, we meet people who may have come from a world so different than ours, yet we are able to look into each other's pasts with so much intrigue and respect, that twenty three years later, people think its cool that you wore bellbottoms sewn by your mum (true story). While I no longer crave the normality I once held in such high regard, I do however try to feed that child in me who desperately craves treats. Sometimes for fun, I make the things I used to look at with envy, but unlike those, these are always high-vibe, hippie-dippy, wonderful. 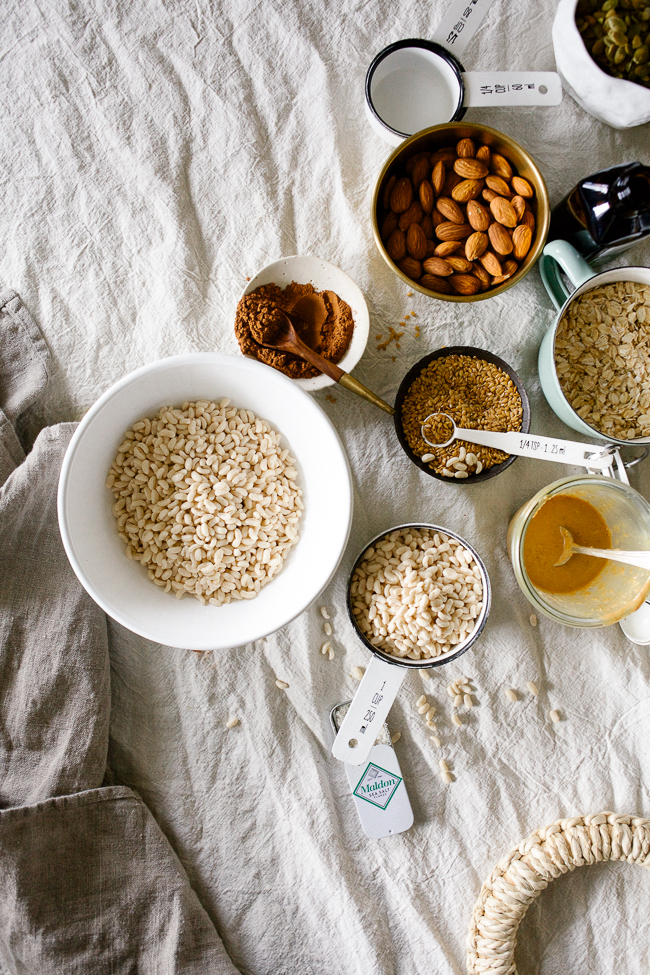 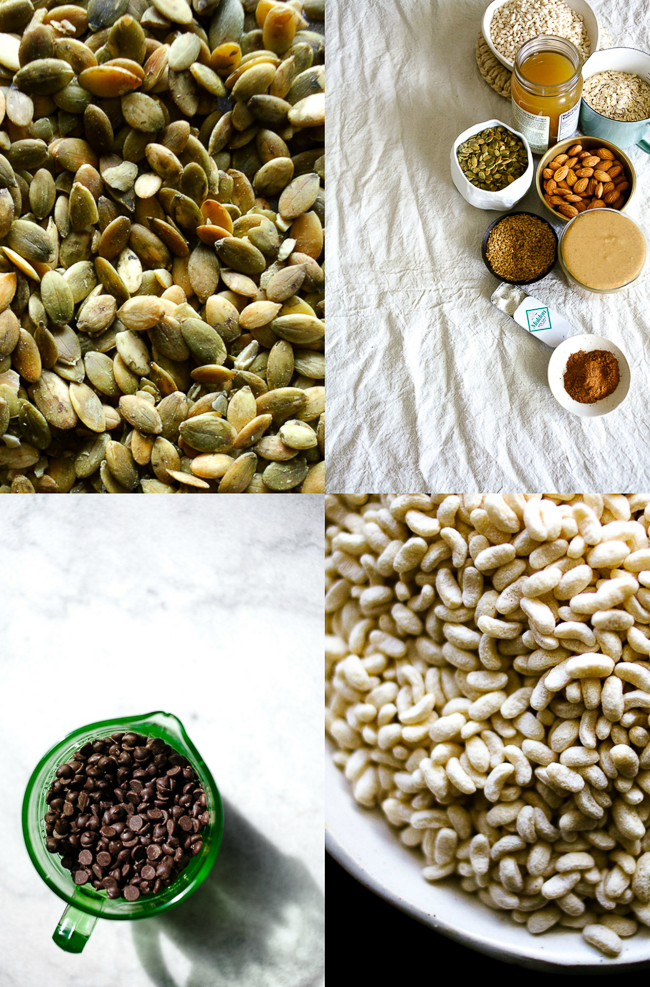 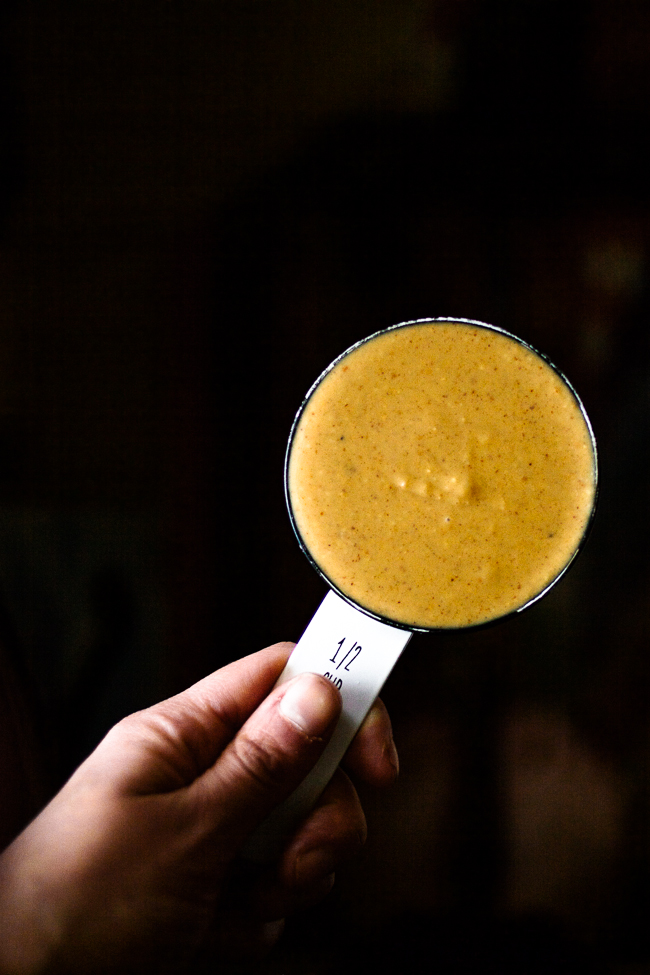 These granola bars are lightly sweetened by - the essential ingredient - brown rice syrup, which helps creates a chewy consistency much like a rice crispy treat. Subbing another sweetener like maple syrup won't work as it won't help bind it all together in the same way. On the other hand, any nut butter will work for this recipe. I opted for almond, but any flavour or blend will work well. Feel free to play around with the types of seeds and nuts added, as well as the amount. Dried fruit would make a nice addition, and if you prefer, chopped chocolate can be added to the base instead of being poured overtop. Much love from this weird kid to you! 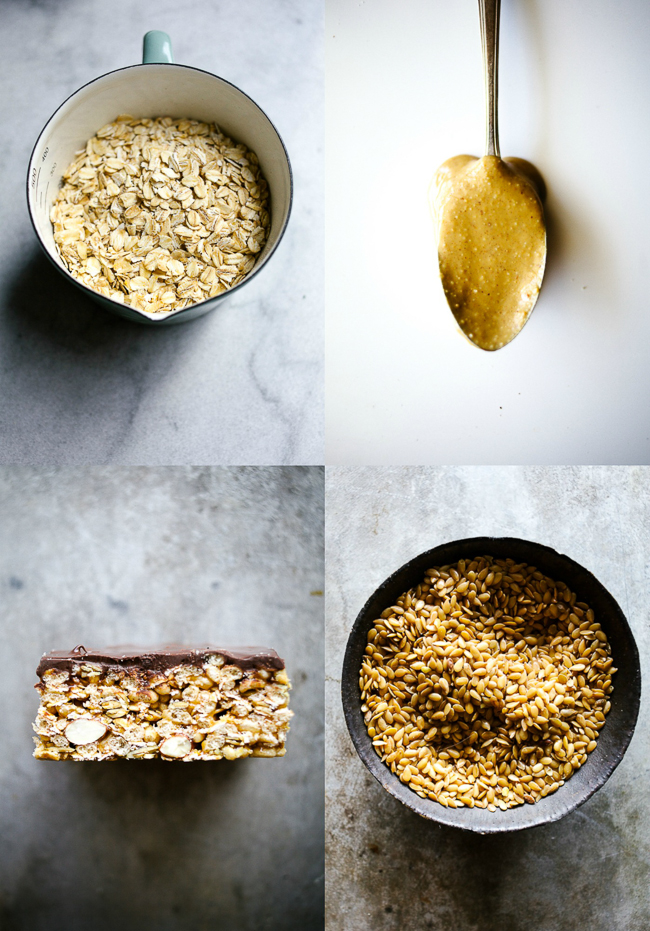 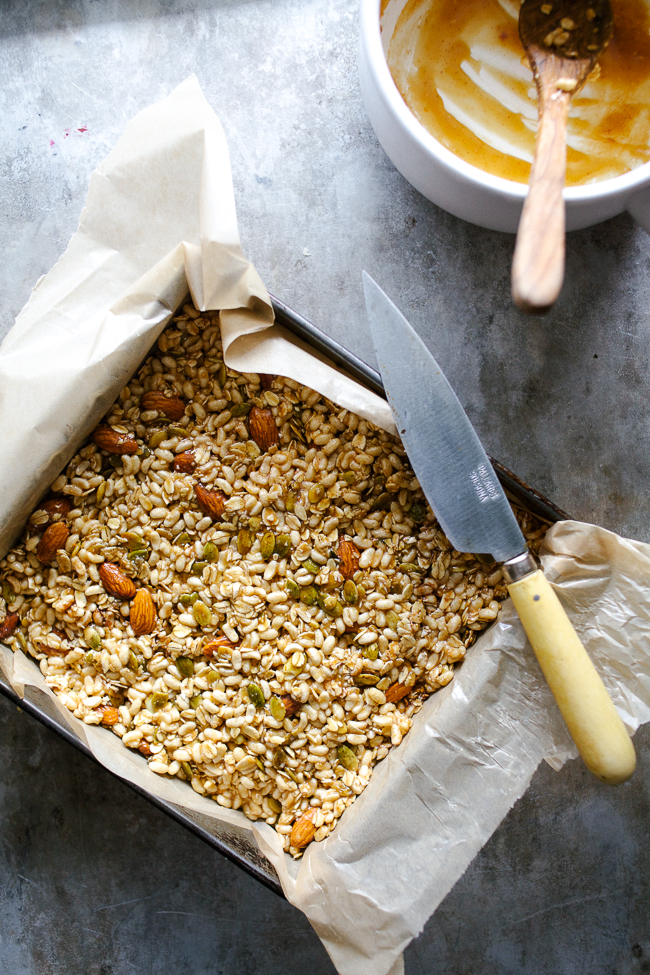 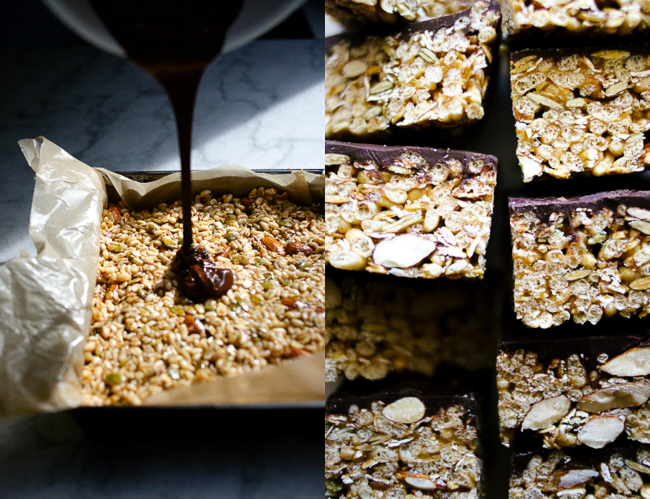 2. Next combine the brown rice syrup and almond putter in a small pot. Heat on low, stirring often, until it becomes runny  and pourable. Remove the mixture from the heat and add the vanilla. Pour the almond butter mix into the dry mix and combine. It will be sticky and harder to do the faster the syrup cools, so work quickly. Once everything is combined, pour into a parchment lined pan (mine was 20 cm/ 8 inch square). Using the back of a metal spoon, spread the mixture evenly creating a even flat surface (it may be warm, so watch your hands).

3. Finally, add the chocolate to either a metal or glass bowl and place over a pot of simmering water. One the chocolate has melted remove the bowl from the heat (it will be hot so be careful) and mix well. Pour the melted chocolate over the bars - a gentle jiggle can help settle it, creating a smooth top. Chill until the chocolate is set, then cut into desired shapes. Store in an airtight container at room temperature. 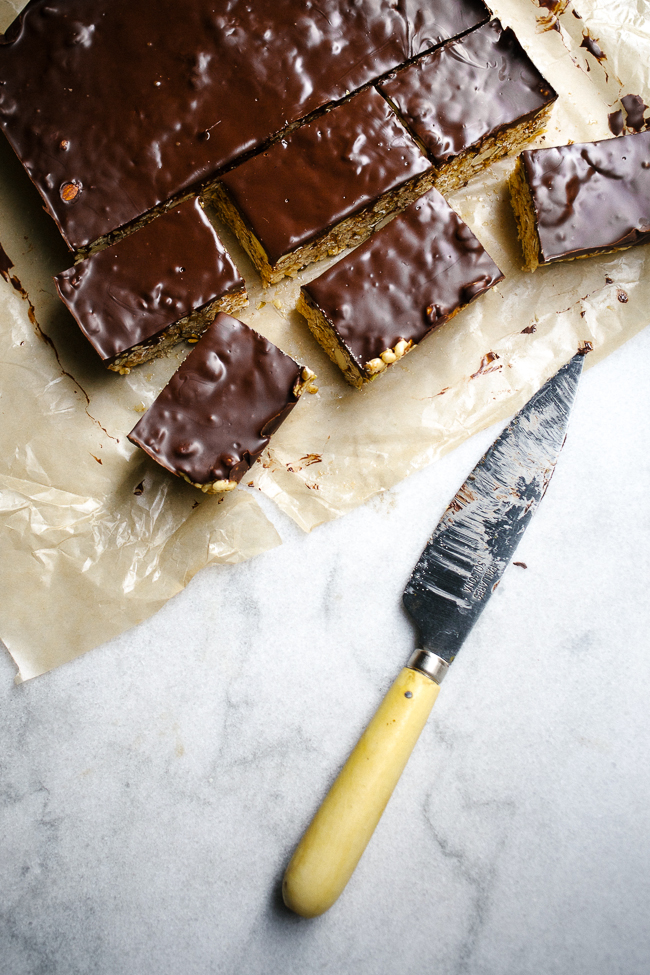 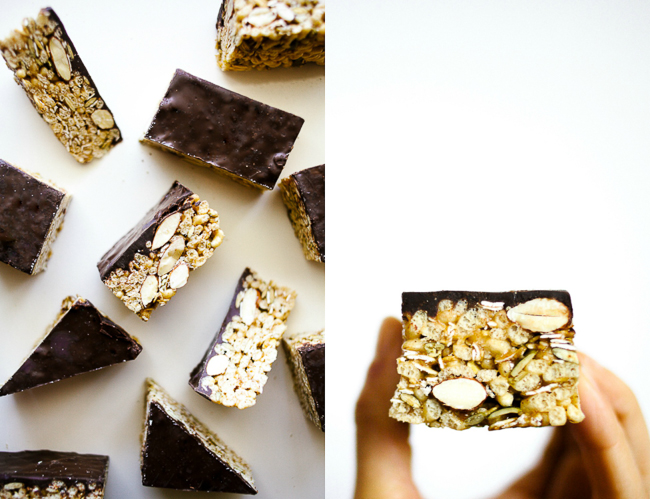 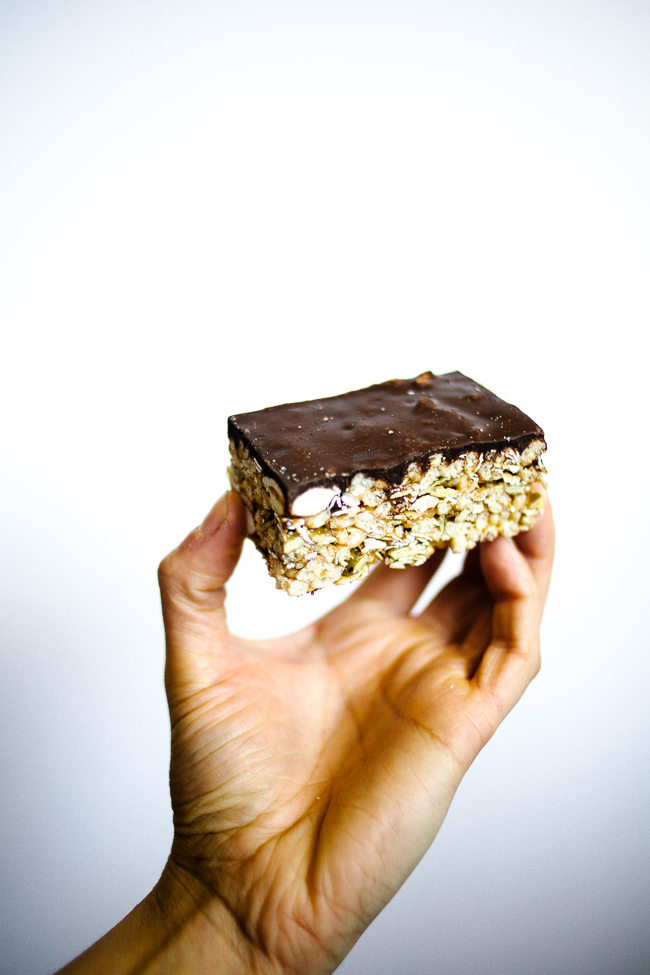