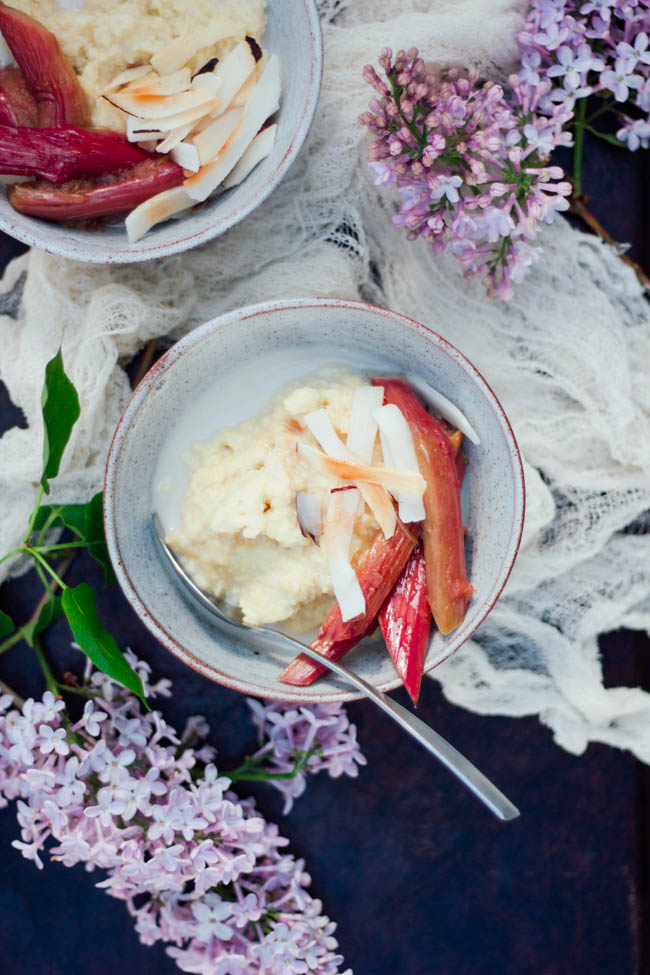 I remember always playing in the vegetable garden as a child. It was this small, fenced in, paradise of overgrown grape vines, wild blackberries, and a little rabbit who would make an appearance on rare occasions. I would traipse through the bed of yellow primroses, duck under the raspberry thickets, and make my way through a canopy of peas to my beloved spot in the garden that was the rhubarb patch. As rhubarb is often the first spring veggie to make an appearance after the long dark winter, it was always one of the most anticipated. My sister and I would gather what we could from the little plant, and along with the eggs from the hen house, would turn the bounty into the most brilliant rosy rhubarb custard pie (always in time for mothers day). A spring tradition was born.

Having rather a delicate (and tart) flavour, rhubarb is often paired alongside other fruit. While many recipes call for rhubarb and strawberries to be married, I often try to use alternative flavours that pack a bit more punch and lend themselves well to the zippy freshness of the fruit. Adding a super-flavour like ginger, helps adds spark and taste without loads of extra sugar usually required in a rhubarb dish. 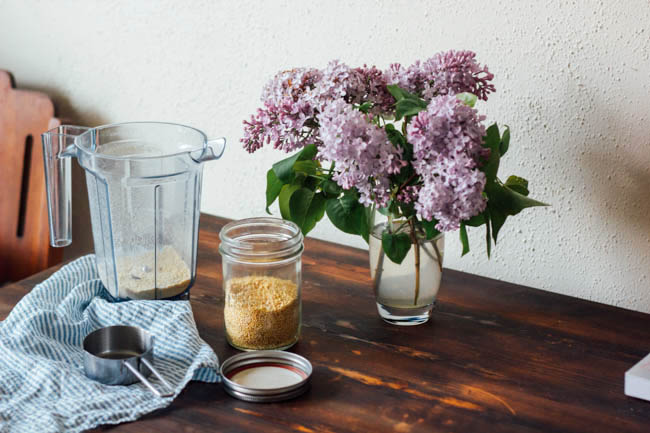 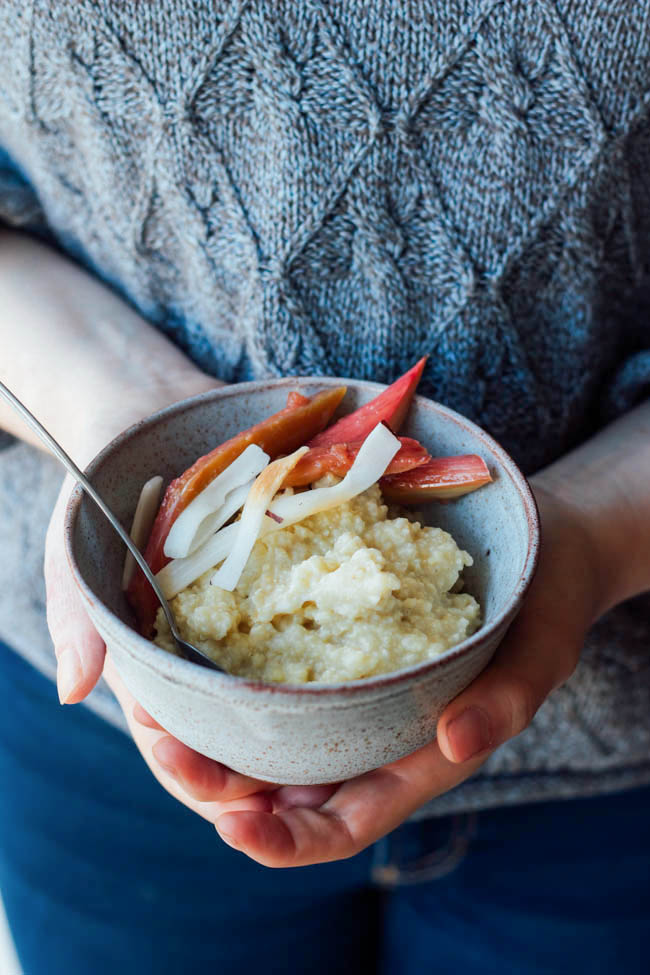 I first discovered this tasty grain when I was a broke student in my early twenties. Originally, I was drawn to the price, as it is possibly the cheapest grain to buy in the bulk section, but I stuck with it for the flavour. While many of us know millet as 'that thing in bird seed' (which is funny because my childhood parrot refused to ever touch it), it is a staple grain to a third of the world's population. Used prior to rice in China, it has a slightly nutty and starchy flavour that lends itself wonderfully as a replacement to rice, pasta, or quinoa. Although there are some claims online warning people of the danger of millet, I believe these should easily be dismissed.  Like many other foods (including brassicas, strawberries, and soy), millet contains goitrogens, or substances which can suppress thyroid function and interfere with iron absorption. Yet, unless you are eating copious amounts of millet flour based products (or have an existing thyroid issue), it is actually a very healthy grain to consume. It is naturally gluten free, alkalizing, and rich in B Vitamins (Foliate and B6), and amino acids. 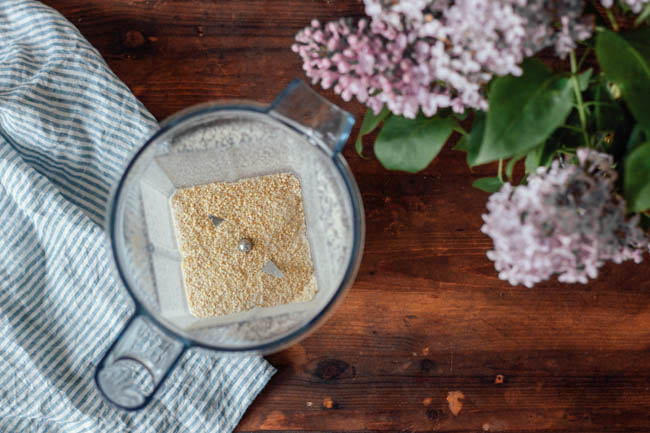 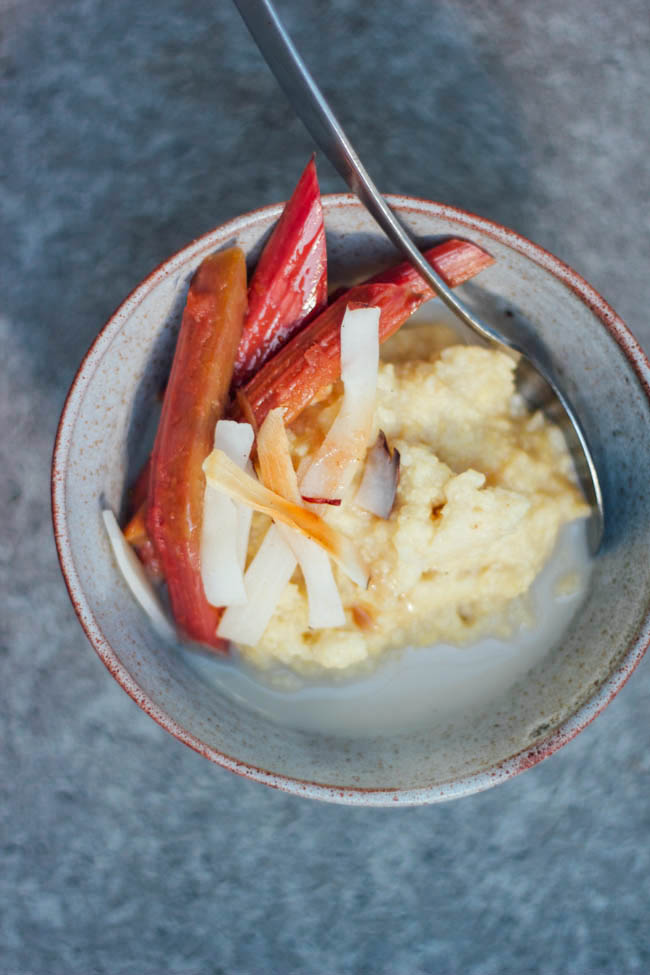 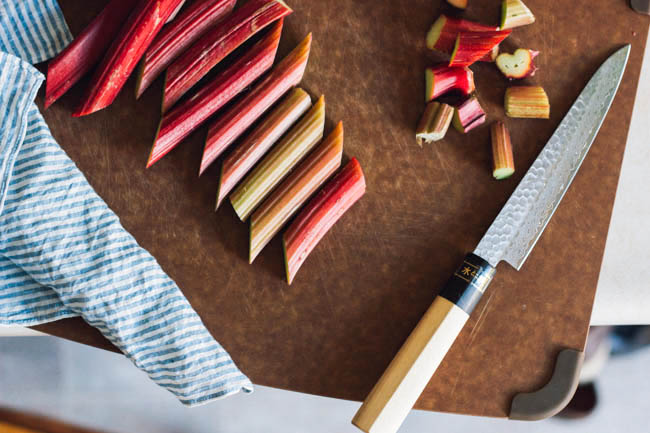 1) Begin by grinding the millet in a high speed blender until it is crushed, but not yet flour (there should be a couple of whole grains kicking around).

2) Whisk together the millet with the water, vanilla, salt, and coconut milk and bring it to the boil, stirring often as the mixture likes to clump.

3) Once boiling, turn down the mixture and simmer until the millet is soft and no longer tastes starchy, about 15-18 minutes. You may need to add a splash more water if it thickens up too much.

4) Garnish with the Rhubarb slices and its juices, almond milk (or more coconut milk) and toasted coconut.

1) While your millet is simmering, heat a frying pan to medium and add all of the ingredients.

2) Let the rhubarb cook for about 2-4 minutes a side before flipping each piece. Cook the slices just until tender, so that they retain their shape. Taste and adjust for sweetness. 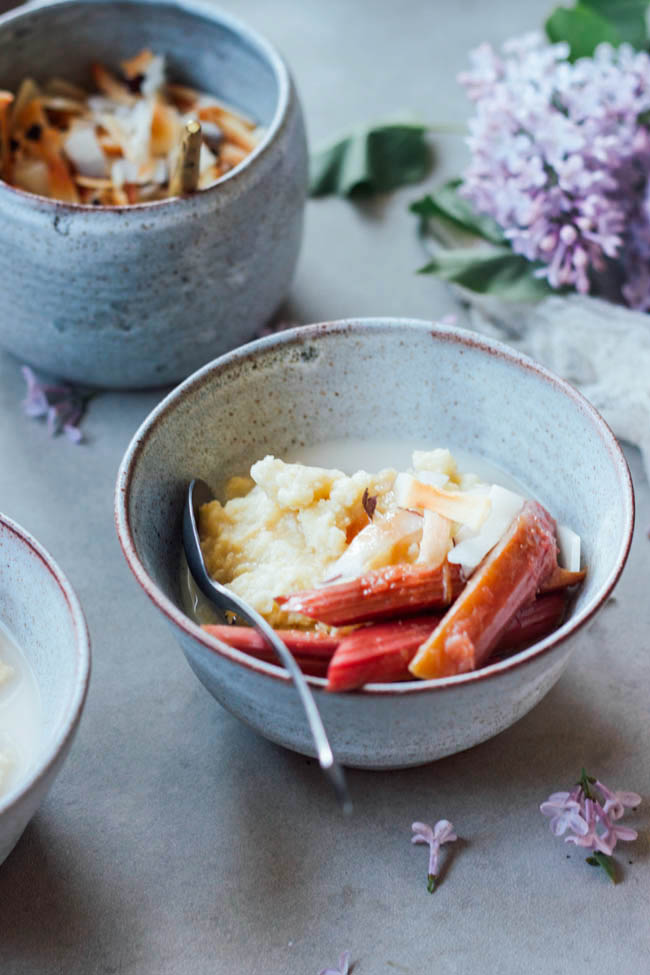 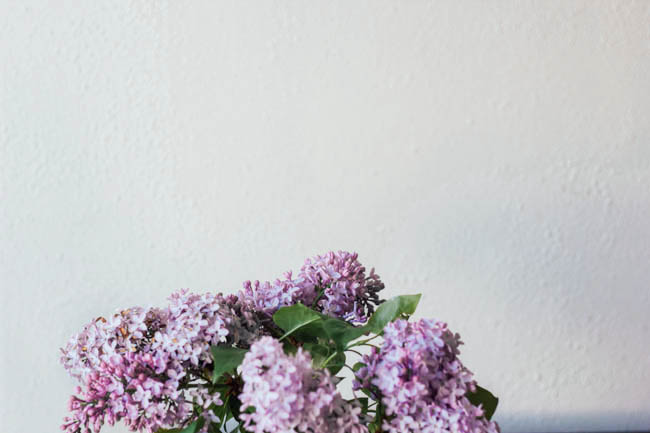